Mars Global Surveyor (MGS), on September 12, 1998, returned the above image of the north polar region of Mars, as viewed from 740 miles out. The picture, courtesy of Malin Space Science Systems/NASA, is a color composite of red- and blue-band MGS imagery, combined with a processed green-band that is an average of the MGS red- and blue-band values. The asymmetrical curve of the horizon is due to spacecraft motion over the span of the exposures.

The swirled-ridge patterns at the pole, extending to the southwest, are layered deposits which are partially covered by the permanent ice cap.

The spacecraft's aero braking is complete and the planned orbital parameters for mapping were achieved with such accuracy that the first planned orbital trim maneuver was cancelled.  Unfortunately, accuracy was deadly off for the Mars Polar Lander, which was destroyed in the Martian atmosphere as it entered too low On September 23, 1999, and now, the health of Global Surveyor takes on added significance, as it is now the only signal-relay source available for the Mars Polar Lander, which is nearing the planet and was to use Climate Orbiter as a communications relay station.

Surveyor's one-Martian-year (687 Earth days) mapping mission was begun in March 1, 1999 after Surveyor achieved a 250-mile circular orbit with a period of two hours. The spacecraft is flying in a "fixed high-gain mapping" mode and its laser altimeter measuring instrument (MOLA) was collecting data for approximately 18 hours per day until April 1 when it began continuous mapping, returning 864,000 elevation measurements daily.

We see features that look like gullies formed by flowing water and the deposits of soil and rocks transported by these flows.  The features appear to be so young that they might be forming today.  We think we are seeing evidence of a groundwater supply, similar to an aquifer.  These are new landforms that have never been seen before on Mars.  I think one of the most interesting and significant aspects of this discovery is what it could mean if human explorers ever go to Mars.  If water is available in substantial volumes in areas other than the poles, it would make it easier for human crews to access and use [for life support, fuel and energy sources].
- Dr. Michael Malin
Principal investigator for the MGS Mars Orbiter Camera, Malin Space Science Systems

With today's discovery, we're no longer talking about a distant time of water-based geological activity].  The debate has moved to present-day Mars.  The presence of liquid water on Mars has profound implications for the question of life, not only in the past, but perhaps even today.  If life ever did develop there, and if it survives to the present time, then these landforms would be great places to look.
- Dr. Ed Weiler
Associate administrator for space science, NASA Headquarters. 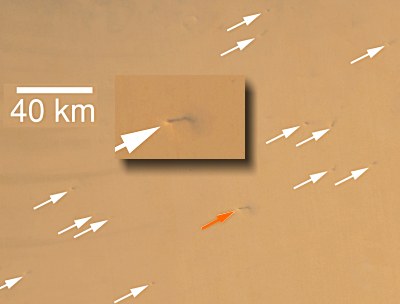 Dust Devils of Amazonis Planitia
The inset highlights the dust devil indicated by the orange arrow.
The scale applies to the larger image, not the inset. 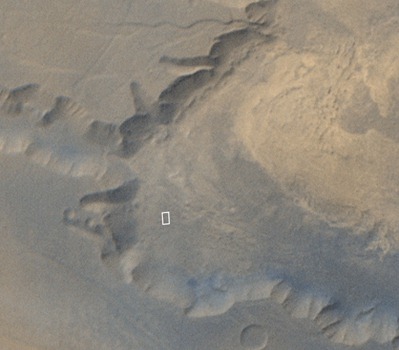 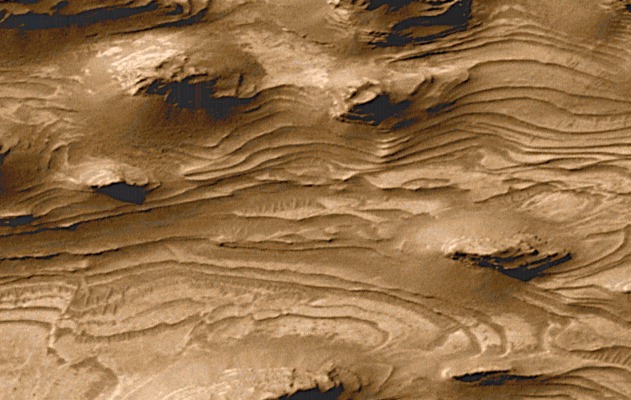 The images above were created from data returned by the Mars Orbiter Camera on NASA's Mars Global Surveyor, and they show the location and details of the terraced areas containing sedimentary rocks that distinguish the West Candor Chasma, which has been revealed through erosion.  The wide view of the Candor Chasma on the top photo above contains a small white rectangle, which is the source area for the segment of the West Candor Chasma enlarged on the image beneath it, which clearly shows the sedimentary area.  Compass orientation is standard.
Malin Space Science Systems Photo - 2000 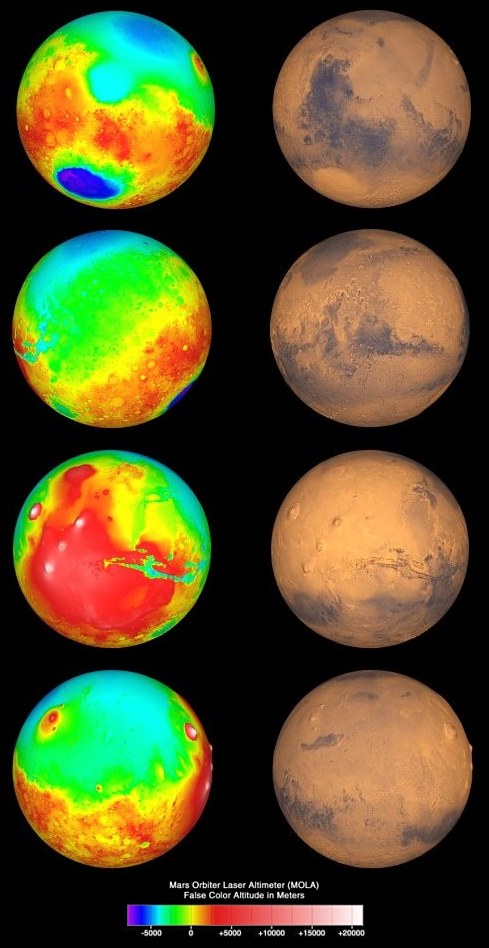 The global, false-color images above were created from data returned by the Mars Orbiter Laser Altimeter on NASA's Mars Global Surveyor and show the planet's elevation in false-color contours on the left, with the true color composites on the right opposite each matching planet view.

The Mars Pathfinder landing site is on the second planet image from the top. The graph at the bottom provides elevation information in meters, where the yellow represents the topographic "sea-level" datum, or the average equatorial surface height of Mars.

This is the first accurate topographic mapping of Mars, even more accurate than what is available for many regions of the Earth. The elevation accuracy is 42 feet (13 meters), and large areas of the flat northern hemisphere are known to be better than six feet (two meters).