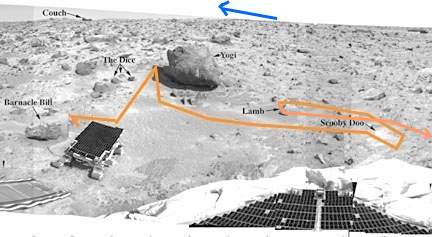 The path of the two-foot-per-minute rover is shown above in orange. New
perspective on the "couch" rock on the horizon indicates a single, large rock.

The prevailing wind, from the northeast, is indicated by the blue arrow, and it
runs, generally, along the path the rover took from Scooby Doo to the lamb.

In this 12-color image of Mars' setting sun, the unusual, balloon-shaped scattering of light was a puzzle to the scientists at a Thursday night CSPAN briefing, conducted within a few weeks of Pathfinder's arrival, a puzzle for which no possible explanations were offered.  The interaction of Mars' magnetic field or the solar wind with iron oxides suspended in the dusty, thinner upper atmosphere, may be contributing if not the responsible factors creating the unusual atmospheric image effect.

The Martian sky is a reddish orange, supports dust, clouds, and perhaps, fog.

There were, billions of years ago, torrential floods which moved massive amounts of water, creating flood plains and channel ridges, one of which is the landing site.

Temperatures on the Martian surface billions of years ago had to be warm enough to keep the post-flood waters from freezing, allowing evaporation to occur over time, perhaps enough time for life to take hold. Now, on a day typical of the first week of Sagan Station's operations, the temperatures ranged from a high of 8 degrees F to an overnight low of -103 F, a hefty day-range more than five times that of Earth's temperate zones--a product of the thinness of the Martian atmosphere.

A series of rapid-interval temperature measurements, recording unexpected seconds-to-minutes variations of as great as 40 degrees F., indicate that the atmosphere, very close to the surface, is extremely turbulent.

The chemical profile of the rock called "Barnacle Bill" matches that of a dozen rock fragments which were blasted off the Martian surface by asteroid impacts, eventually impacting the Earth as meteorites and finding their way into the laboratories of planetary scientists. The rock's (Bill's) composition is speculated to be one-third quartz, based on the amount of silica detected, while the other two major components present, feldspar and orthopyroxene, are the most common minerals found in Earth rocks. The rock called "Yogi" contains greater amounts of magnesium than "Bill," which, scientists observed, makes Yogi older than Bill, and even more like rocks on Earth, and therefore, Mars' geology is more like Earth than is the Moon's.

Although the confirmation that there is water on Mars, and that it is circulating through the atmosphere in sufficient amount to create cloud patterns, the clouds are relatively (as compared with Earth's air density) at a high altitude, composed mostly of ice-water droplets, and of the kind which will never, unless acted upon by external forces (such as in the form of steam as a consequence of conversion of matter by shock-wave energy expended by a penetrating meteorite), be warmed enough to allow any possibility that there is, anyhere on Mars, such a delicate thing as an evaporative spring drizzle here on Earth (no rain on Mars). This does not discount the possibility of life, but it does add a reason to the list those of that explain why Mars may be lifeless.

A new technology for economically delivering scientific platforms to extraterrestrial bodies has been tested, confirmed, and has provided data to guide further refinement.